Tia is 11.  She has a chromosome abnormality which means she was born with Lissencephaly – smooth brain.  It’s an extremely rare condition which it is estimated affects between 10 to 40 per million babies.  In Tia’s case, it has affected both her mental and physical development. 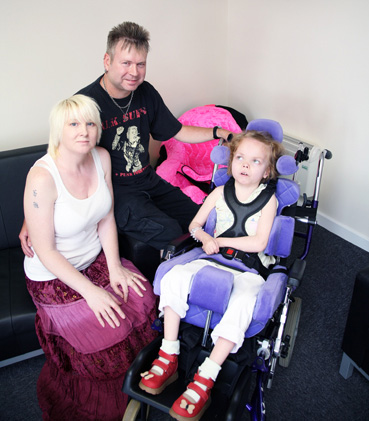 For Tia Lissenchepaly means that she has no speech and the mental age of a six to nine month old baby.  In addition her condition means that her physical development has been profoundly delayed and she has poor muscle development.  She is unable to sit unaided.

Tia has been referred through the NHS and has several pieces of Specialised Orthotic Services’s (SOS) equipment which, as her parents Sue and Ian explain, has helped both her mental well being and physical symptoms of her condition:

“Tia has very poor trunk control and she has a dislocated hip which means that she needs seating that both helps correct her hip as well as give full body support.

“She has a Mojo seating base and a BB seat, both from SOS, and despite being on medication which restricts her weight-gain she’s now in her third chair in five years.  The BB seat is a modular seating system which can be adapted to Tia’s needs.

“Tia’s seat has several components to help her – a head rest which helps keep her head in an upright position and helps her see what’s going on around her.  Her harness helps support her trunk and stop her falling forward and a hip belt and pommel both help keep her dislocated hip in the right position.  We believe this seat has really helped her physical development.  When the physiotherapist examined her she couldn’t believe how straight her spine was.  She was expecting it to be curved.  Ankle supports and foot rests also help keep her grounded as she can feel her feet are supported.

“We believe her seating has also helped with her digestion.  Tia suffered with digestive problems and was diagnosed with dysphagia.  She was inhaling her food into her lungs and getting weekly chest infections for which she was being hospitalised.  This was a real worry and the doctors suggested a peg so food could go straight into her stomach, but we wanted to explore other options as once the procedure has been undertaken it’s irreversible.  Once Tia was fitted with her BB seat the problems stopped.  She’s not had a chest infection since thank goodness. 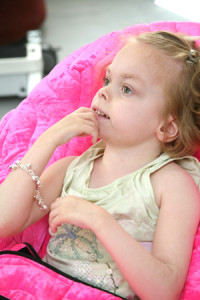 “She also has a ‘P’ Pod from SOS which we decided to buy privately.  It’s a great piece of kit as it looks like a beanbag and gives her another seating option – she can view the world from a different angle.  We chose the standard seat, as opposed to the moulded one, so she can grow into it.  It’s a great addition for us too because it’s unobtrusive in the home and it’s so easy to transport and move around.  She goes in the garden in it and is really happy, and because it’s lightweight and easy to assemble and take apart we can just throw it into the car and take it on holiday with us.

“Tia was one of the first children to have a ‘P’ Pod and we came across it at the Naidex exhibition.  We’d taken Tia there to have a look and see what new equipment was being developed and saw the ‘P’ Pod on SOS’ stand.  Well we had to let Tia have a go in it and as soon as she was seated she was really happy, clapping away.  Then sat back and put her hands behind her head, something she rarely does.  She looked really chilled and relaxed.  She even drew a crowd of passers-by who couldn’t quite believe what they were seeing.

“When we’re out and about it’s amazing how many people stop us in the street and ask ‘Is that a BB chair?’ both medical professionals as well as parents of disabled children.  We’re really thankful for all the SOS has done for Tia, the equipment has really helped her condition and because she’s such a happy child it means caring for her is a pleasure.”

Tia goes to the Woodlands School in Coleshill and the family live with Tia’s 19 year old sister, Elizabeth in Atherstone, Warwickshire.

0 Comments/in Recommended by You /by marketing
0 replies