Specialised Orthotic Services are proud to have donated a PPod for Sophia Edwards, Luston.  At age 92 Sophia’s health began to fail and could not cope living alone.  She has since moved to Waverley House Care Home, Leominster.  PPods in spite of their bright colours are suitable for all ages. Sophia has been very pleased with her new PPod which allows her to sit more comfortably and live life to the full. 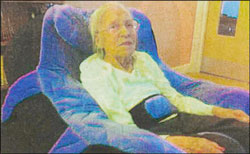 Sophia Sitting in her PPod donated by Specialised Orthotic Services

FORGET your iPods and ipads, a Leominster lady is sitting pretty thanks to a P-Pod chair made especially for her small frame.

Sophia Edwards, from Luston, worked until she was 72 as a local home help.

“Sophia has settled in really well, but being a very small lady has its problems. My staff team and I felt her size was sometimes stopping her enjoying life to the full”.

Sophia’s family agreed, and the home began a search for a solution. Advice was sought from a physiotherapist, who works with Waverley House sometimes, and suggested they contact www.specialorthoticservices.co.uk

The company had the answer and a P-Pod chair was delivered for a month’s trial. Sophia really enjoys using the chair which wraps around her and enables her feet to be on the floor. Krystyne Czerpak of Specialised Orthotic Services said: “We are extremely pleased that our P-Pod was able to give Mrs Edwards the special seating that she needed. ”The welfare of our service users are what motivates us to maintain excellence. It is our absolute pleasure to be able to donate the P-Pod.”