Luke Woolett, aged 19, is a chatterbox – in the nicest sense. He is a quadriplegic, all four of his limbs are affected by his condition. He’s been in a chair from a young age, but he has an active life, a spirited outlook and an opinion on everything! We met Luke at Specialised Orthotic Services’, otherwise known as SOS, headquarters in Tutbury, Staffordshire with his Mum Deborah, and Dad Rob. 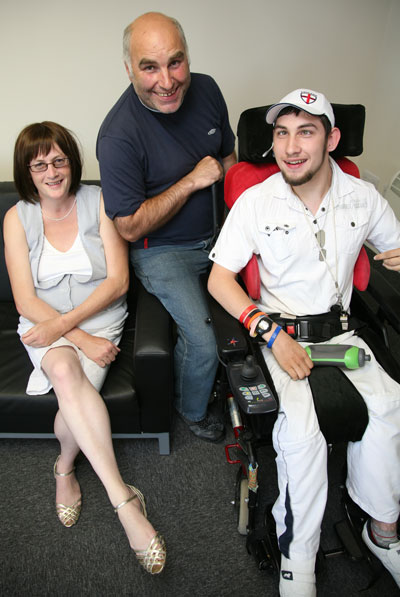 Luke explains: “I go to Portland College where I stay all week. At college I learn how to use a computer, cook, wash and even play the Wii drums.”

He’s working hard to learn to be independent, which is something his parents really encourage.

Deborah, describes what both parents have been through to get him here: “Luke was born prematurely and as a result was really poorly. At 12 days old he had a massive fit which lasted an hour. Then he had another and had to be tube fed. We took him home where he became more relaxed and started to gain weight. Neighbours helped me cope and home help gave respite. However, we’ve always challenged both his condition and what medics told us he was capable of. During his early years we spent time in Hungary where Luke received help to build his muscles. He was soon using a tricycle. He then went to mainstream school where we saw real improvements such as him asking to use the toilet. We believe what you put in you get out and we’ve always encouraged him learning to be independent.”

“He’s been at Portland College, for people with disabilities, for one year which is part of a three years course, where he learns life skills and how to do things to help look after himself.”

Luke has a left side weaker than his right but both his parents say his left hand is improving. To help support his posture he’s been given an SOS BB chair which is a modular design. This means that pads to be altered easily to support his changing needs. Luke’s BB chair has been fitted to his electric wheelchair from another manufacturer which also helps him get about unaided. The SOS Quick Lok system fitted to his chair was designed for exactly that purpose so it can be used with other wheelbases. This helps give Luke his independence so he’s able to do activities and get integrated in projects at school.

Deborah continues: “The BB chair has side supports to ensure his posture is nice and straight. He also has a harness across his chest which stops him tipping forward. The pommel between his legs keeps his frame in the right position but also ensures that he doesn’t slip down in his chair. In addition to this his chair has a tilt function. We’ve shown him how to check his posture is correct and Luke does this religiously. So if he feels as though he’s slipping out of the correct position he can tilt himself back and right himself easily. He knows exactly what to do and constantly checks himself.”

Luke spends most of his time in his chair which not only allows him freedom to get about but also helps correct his posture. He’s gaining in upper body strength and he’s getting straighter legs. The BB chair is for those that need midline support – to ensure posture is supported and ultimately beneficial. This type of seating is robust and SOS fits each seat individually according to the client’s needs.

Assessments are usually carried out at local wheelchair service Special Seating Clinics. Deborah concludes: “We want him to be independent and he thoroughly enjoys learning new skills at college and coming home at the weekend and telling us about his week. We think that his chair, because it supports his needs, has helped him enormously.”

0 Comments/in Recommended by You /by marketing
0 replies